Things don’t often change as quickly in the UK as they have in recent weeks. The coronavirus epidemic has seen sweeping changes in the last few weeks. Government policy changes seemingly daily, affecting everything from jobs to foreign travel. One of the main changes is in the NHS, with everyone gearing up to treat people who are ill with coronavirus. The Disclosure and Barring Service has made similar changes to its processes to cope with the increased level of demand for DBS certificates over this period. Although it doesn’t go as far as a full fast-track service, there are several important changes for NHS key worker staff. 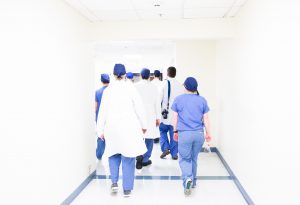 The first main change is that the standard fee is being waived for specific roles. The full list of eligible roles is on the government’s DBS website. The list is quite extensive and includes a wide range of people involved in the emergency coronavirus response. Roles such as midwives, GPs, care workers, emergency service workers and doctors are all included. In other situations, the NHS will pay for most DBS checks for these people. Waiving the fee takes some of the administrative burden from the NHS staff. Emergency volunteers are also included in the scheme, even though most volunteers don’t pay for their DBS certificates anyway. All registered bodies and umbrella bodies should be up to speed with the new application process.

In addition to prioritising disclosure checks from NHS staff and volunteers, the DBS has also come up with a way of getting them into work more quickly. Healthcare staff usually need an enhanced disclosure check, and a search of the barring list. The barring lists are centrally held registers of people legally blocked from working with children, adults, or both. At present, the Disclosure and Barring Service are checking the Barring Lists, then immediately feeding back results to the NHS. That means that staff and volunteers can start work quickly, assuming their names aren’t on the barred lists. A full disclosure check follows at a later date. These checks, along with standard NHS safeguarding, should be enough to keep patients safe at this stressful time.

In deciding to allow increased flexibility and searches of the Barred Lists only, the government had to balance risk to patients against the benefits of getting more people into the NHS quickly. Some very interesting statistics came out of the decision making. According to the DBS, 95% of all enhanced disclosure checks come back clean. This means that the applicant either has no criminal record at all. Alternatively, it means that the crimes were so minor the police have decided they are irrelevant. Only 0.02% of applications involving a Barred List search, return a result. Many of the people who are applying to help the NHS are former workers, recently retired or who have simply left to work elsewhere. If they have left the NHS recently, and their previous DBS certificate is dated within the last couple of years, there’s no need for them to get another one right away.

The NHS is also traditionally a very bureaucratic organisation. There are many examples of NHS administrators asking for repeated DBS checks for people moving roles within the same NHS trust. The DBS has recommended major changes to this during the pandemic. Healthcare settings such as hospitals, clinics or care homes have been advised that they should consider accepting a previously issued DBS check dated within the last three years rather than asking for a new one. Similarly, someone who has been volunteering and now wishes to move into a paid position shouldn’t be asked for a new DBS certificate either.

The application form for this new, fast DBS check is the same. There is lots of guidance online about how you should complete the form to make sure your barred list check comes back quickly. NHS HR departments will also be able to help, but remember that they are under increased pressure too. Similarly, the DBS helpline is there to answer queries, but is also working with increased applications and fewer staff. Keep checking the DBS website, where all new information will be uploaded as soon as the decision is made.